“The headlines and issues are the same. Women’s leadership, capabilities, and role in society still remain questioned and berated. The only thing that has changed are the names of the women being targeted in these headlines.”

Since 1987, March has been declared as National Women’s History Month in the U.S. (October in Canada), where we honor the achievements of women. Women have accomplished a multitude of things in history that range from uncovering extraordinary discoveries in science, becoming Olympic athletes, to becoming activists that have mobilized entire movements and shaped the face of society. Feminism is the range of movements and ideologies that focus on advocating for gender equality. However, it’s important to understand that the history of feminism in the United States has primarily focused on the struggles of white women and has willfully ignored the oppression of minority women. 1920 was the year where only white women gained voting rights whereas Native-American women were not given voting privileges until 1947, Asian-American women in 1952, and finally in 1963, were extended to Black women (Aljazeera). This is to say, we still have a long way to go as the fight for equality has not always been inclusive to all women.

In order to fully embrace Women’s History Month, we must celebrate all types of women, as well as all the hardships and adversity women have faced where they were never given the same opportunity as men or were held to a different standard. While we may use March as a time to celebrate the successes of women, it is more critical to understand that oppressive institutions such as the patriarchy are tools maintained by white supremacy. The patriarchy is still deeply rooted into our society when women continue to get paid less in the workplace, when women do not have equal representation in elected positions, when women’s bodies are openly objectified and disenfranchised, and when women are always expected to keep quiet and smile in the face of this open discrimination. Even the best intentions can have negative impacts. Last year UNAVSA addressed issues of day-to-day microaggressions faced by women and expectations that female politicians encounter in a professional environment. A year ago, gender-biased headlines were targeting Hillary Clinton. As of recently, Clinton has not been making these headlines. However, the headlines and issues are the same. Women’s leadership, capabilities, and role in society still remain questioned and berated. The only thing that has changed are the names of the women being targeted in these headlines.

So what issues remain rampant within our society regarding women in leadership roles?

The same: women in leadership still face a “double bind”

Last year we touched upon Jessica Salerno and Liana Peter-Hagene’s study finding that expressions of anger increase the social influence of men; the opposite effect is true for women (2015). This finding is consistent with the double bind theory. A double bind consists of two mutually exclusive messages in which meeting the demands of one will result in failing to do so for the other and vice versa. This is often a gender biased social situation that makes it impossible for a woman to make an assertive argument or stance without “failing” to maintain expected traditional social behaviors of a woman. There was a news headline quoting Hillary Clinton saying, “I had to learn as a young woman to control my emotions” that reflects how this phenomenon burdens women in leadership (Crockett 2016). Following the 2016 U.S. presidential election, Clinton has appeared in fewer headlines. However, we saw a surge in headlines targeting women in the 2018 midterm elections or who have declared their 2020 presidential campaign. This list includes names such as Alexandria Ocasio-Cortez, Ilhan Omar, Elizabeth Warren, and Kamala Harris. Words such as crazy, radical, angry, darling, disrespectful, and aggressive are examples of gender biased words that perpetuate sexism in our language, media, and society. Women constantly face criticisms about their behavior, personality, appearance, and other subjects irrelevant to their role and capabilities. 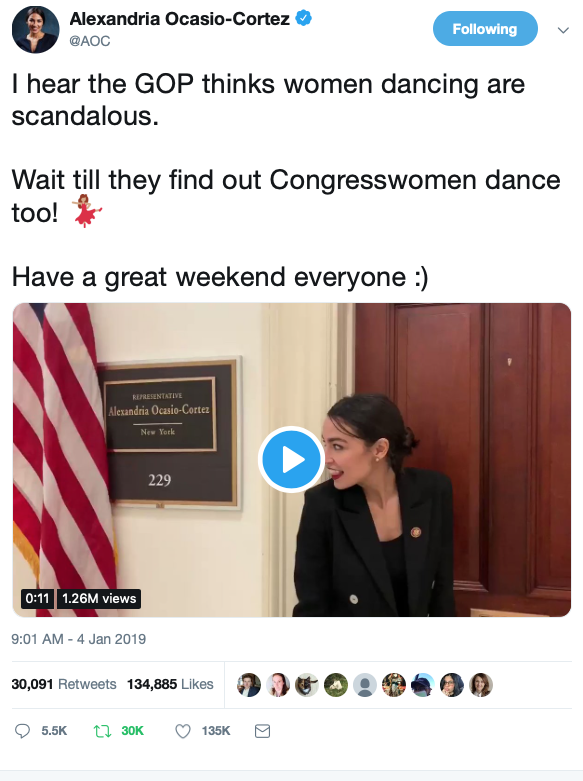 A video of Representative Ocasio-Cortez dancing to a Breakfast Club tribute video in college was used as an attempt to smear her image and depict her as “scandalous.” This is her response on Twitter.

Women in leadership frequently have to justify their actions and fight for equal rights, protection, and treatment. Being in this situation creates a toxic environment that suffocates the voices of women and inhibits personal, community, and societal growth. While it is incredible to see Representative Ocasio-Cortez reclaim and embrace this moment, it can also become draining having to constantly fight back and respond. Women in leadership remain in public scrutiny regardless of their age, background, tenure, etc.–one mistake or misleading information can be extremely detrimental to their career and reputation. On the other hand, men in leadership positions might be depicted as bold or heroic for taking unconventional approaches and opinions. This type of scrutiny can also manifest in microaggressions and interpersonal interactions. For example, women with more direct leadership styles receive gender biased feedbacks such as “not being nice or approachable” that their male counterparts do not face. Understanding how gender inequality shows up in our day-to-day interactions and broader social context can empower us to confront these issues and be advocates for greater social change.

Women’s History Month has to go beyond merely congratulating all the amazing women in history; it is also a time to reflect and step forward towards gender equality. We must disrupt the paradigm that forces women to endure social constructs while staying complicit in their own suffering, whether it is from laws or microinteractions. The times are changing and with more women in leadership, the hopes is our communities can thrive with different perspectives in policy change. In 2019 there has been a record breaking year where women hold substantial positions in U.S. Government. According to the Center for American Women in Politics (CAWP), 127 women hold seats, or 23.7% in Congress. 25 women hold municipal official positions, 86 women hold statewide elective executive offices, and 2,126 women hold state legislature positions. Since 1971 state legislature has more than quintupled. Maneuvering over in the business world, only 25 females hold a CEO position in Fortune 500 Companies. It’s not just females that are needed, but also diversity. In higher education, only 27% of full time Professors at universities and colleges were white. Out of the 27%, 3% were Asian, and 2% were Black. Though more women are entering various industries, showing progression in our society, the need for women in leadership at all levels  is still high.

UNAVSA hopes all our constituents reflect on interpersonal interactions and the major societal shifts all over the world as women continue to fight for equality. We will be continuing the dialogue in April for Sexual Assault Awareness Month where we will bring about more awareness to the issue of rape culture, the need for consent, and provide ways to support survivors of sexual assault and domestic violence. Women’s bodies have always been the centerpieces of political battles, and their emotions have always been invalidated, but women should be able to reclaim them as a form of resistance. After all women are human too, with very diverse skills and dynamic experiences that go beyond a blanket stereotype. Ultimately, having women in leadership roles–particularly women of color–allows for the progression of all marginalized communities.

We, at UNAVSA, have to continue educating ourselves on all the forms of oppression that intertwine and still occur today in order to dismantle the framework that holds us back in order to collectively rebuild one that will restore the agency of all women.