The Hierarchy of Taste: Does Vietnamese food HAVE to be CHEAP?

Several years ago, I randomly thought, “Why are so many Asian cuisines expected to be cheap in America, but white foods are considered more prestigious?” Think about it: If you wanted to celebrate a special occasion, you’d go to a 4-star French restaurant, but if you wanted something after a long day’s work, you’d order Chinese takeout.

Growing up in American society, I was taught to expect certain ethnic foods, like Vietnamese or Chinese, to be cheap. Until then I had never questioned it. Why should I accept this as the status quo? What about these Asian foods make them any less worthwhile than French, Italian, or Spanish ones? Krishnendu Ray, the Associate Professor and Chair of the Department of Nutrition, Food Studies and Public Health at New York University, believes the answer lies in how we view migration patterns and a country’s wealth. In other words, the dominant society’s acceptance and enjoyment of ethnic cuisines are linked to their acceptance and inclusion of the immigrant and ethnic groups, themselves. 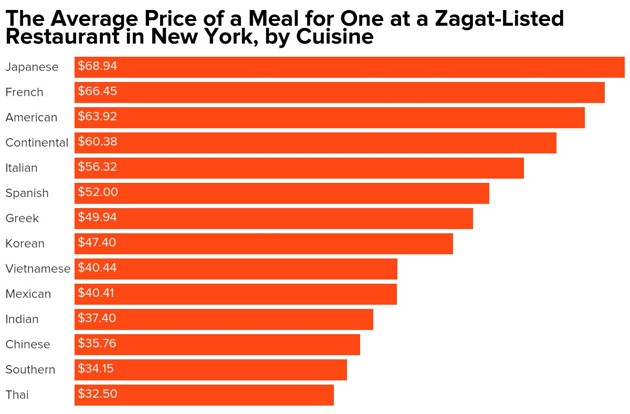 In his book, The Ethnic Restaurateur, Ray presents the idea of the “global hierarchy of taste.” This hierarchy is one that privileges nations with economic power and military might, and one that correlates inversely with migration rates of poor people. That is, the higher the migration rate from a country, the poorer that country probably is, therefore the lower their respective cuisines appear on the hierarchy. You can see this hierarchy clearly in America with its diverse demographics and large immigrant population. The ways in which different ethnic groups and their respective cuisines are viewed are not equal across the board; rather, people’s responses to different cuisines are influenced by their perceptions of migrants and their origins.

Historically, the United States has been known to view the cuisine of immigrants negatively, particularly the poorer and more recent they are. For example, when poor Italians first immigrated to the U.S. in the late 1800s and early 1900s to escape from poverty in their home country, their food was not held in high regard; people complained that there was too much garlic and their dishes were overspiced. It wasn’t until Italians climbed up the socio-economic ladder, and migrant flows to the US slowed down did their cuisine start becoming more respected, in turn, demanding higher prices for their once-derided dishes. Today, Italian immigration to the US is very low and Italian cuisine is regarded as the most popular ethnic cuisine in America. 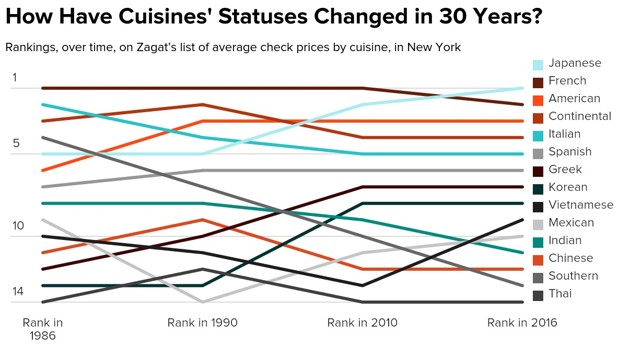 The popularity of Japanese cuisine is a more recent example of this phenomenon. In the early 1900s, Japanese migration was at its highest point in the United States and anti-Japanese sentiment was rampant. The Asiatic Exclusion League was formed to push for legislation against Japanese migration. During the Second World War, Japan allied itself with the Axis powers, such as Nazi Germany. As a result, the US perceived individuals of Japanese origin, regardless of whether they were long-term US citizens, to be enemy aliens and sent them to internment camps. Since Japanese immigrants were viewed negatively, there wasn’t a demand for Japanese cuisine in American society. Fast forward to today, as Japanese migration to the U.S. has slowed down and the country became wealthier, Japanese culture and cuisine, specifically, have gained increasing respect in the U.S. This is reflected in the higher price tags they’re able to demand at restaurants and in which we’re willing to pay. In 1986, Japanese cuisine ranked sixth in expensiveness. By 2016, they had overtaken French cuisine for the top spot. Ray says, “I see that Japanese chefs are valued because Japanese culture is valued in the Western world because of its economic power.”

Economic decline, famine, war and conflict are major causes of global migration, so it makes sense that many immigrants do not come from countries that are rich and stable. In addition, the most recent migration wave to the United States is mostly populated with people from Latin America and Asia. The freshness of these immigrant groups, and the fact that they come from poorer countries, means they arrive to the U.S. where many Americans may have preconceived notions that they are less well-off, therefore their dishes are viewed lower on the totem pole. This helps explain why you’ll often see Latin American and Asian cuisines on the lower end of the price hierarchy of ethnic cuisines.

Now that we understand the link between a country’s wealth and our perceptions of its cuisine, we need to consider why some cuisines are still expected to be cheap despite their growing economic power. If China is considered an economic power-house, and Vietnam has one of the fastest growing economies in the world, why aren’t they considered haute cuisines? Unfortunately, a country’s wealth is not the most important factor influencing people’s perceptions and responses to different ethnic groups and their cuisines.  What mainstream America considers to be foreign, and their misconceptions about “foreign” people, can determine whether or not a cuisine’s prestige is elevated or demoted in the hierarchy. To elaborate this point, Ray explains in the  podcast The Sporkful  that, “Most of the Japanese we are familiar with are business folks, are executives. But right now, most Americans associate Chinese food with relatively impoverished Chinese immigrants.” Similarly, because the dominant American society still associate Vietnamese people with the Vietnam War, they think of them primarily as poor refugees. Negative perceptions of Vietnamese people may also still exist because of America’s loss in the war and the scars remaining from the war that still haunt American society.

Similar stereotypical expectations apply to Native American food and why, despite being the most truly American food you can get, it is struggling to gain cultural appeal or prestige. At Tocabe, one of the few Native American restaurants in the U.S., patrons “come in expecting what they’ve seen portrayed on television or in popular culture; their expectations are often based on stereotypes.” They even ask why the employees are not wearing braids. Unless your nation and people are relatable to Western culture, mainstream America will brand you as “foreign.” These stereotypical expectations of a group, and the misguided perceptions of their respective economies, affect the way we view their cuisine in the hierarchy.

“Immigrants can’t sell anything full price in America,” Taiwanese-American author and restaurateur Eddie Huang remembers his father telling him. We’ve tied our views of ethnic cuisine to their respective migrant groups’ capital, resulting in the expectation that food from poor people must be inexpensive, therefore expensive versions of said food are not authentic. I’ve certainly been guilty of going to a contemporary Vietnamese restaurant and thinking, “Wow, I can get this for so much cheaper at the other Vietnamese place!” (Ironically, French influence has been in Vietnamese cuisine ever since they colonized the country, yet Vietnamese foods cannot afford the same prestige as their colonizer.) I used to always accuse expensive Vietnamese restaurants of being inauthentic, which I understand now is a problematic thought. I’d been conditioned to expect Vietnamese food to come cheap because that’s what mainstream America expects. When we demand “authentic” ethnic food, Ray explains, what we really want is “a true copy of our expectations.” 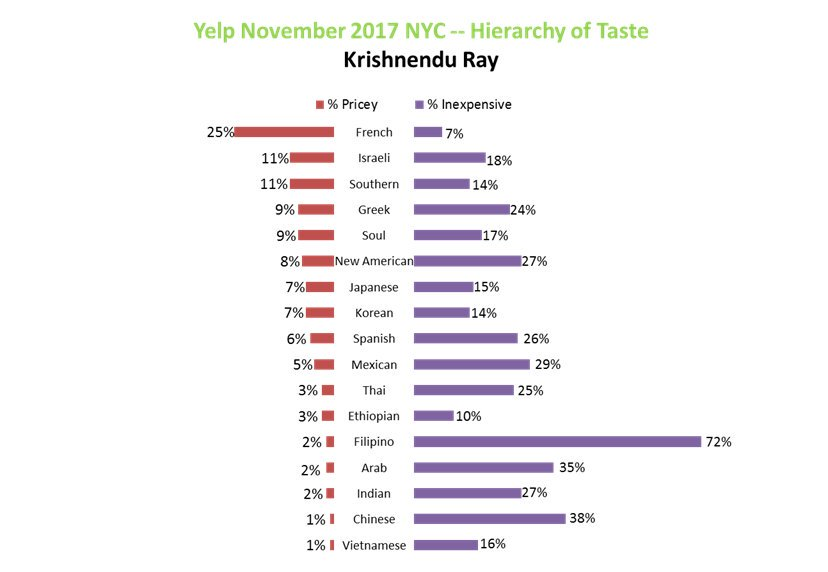 Even when we do try to promote Vietnamese cuisine as high-end affairs it can come off as pandering to a white audience. Take the upscale Vietnamese restaurant Le Colonial as an example. With locations in New York City and Chicago, they’re promoted as “a celebration of the seductive spirit and vivid flavors of 1920’s French Colonial Southeast Asia.” This supports the idea that Le Colonial can sell expensive Vietnamese food and be considered high-end because of its French connection. It’s not enough that these establishments serve Vietnamese food, but their colonial history must be celebrated and acknowledged because of its association to whiteness.

Even though Vietnamese food is yet to be considered haute cuisine, its rising popularity is already opening the door to cultural appropriation. There’s been an instance where white restaurateurs tried to trademark the word “phở,” or when a white chef tried to educate people how to “properly” eat phở. One can only imagine the various forms Vietnamese food may take once, if ever, the restaurant world deems it prestigious enough to warrant high prices, thus encouraging outside influences to put their own stamp on it.

Vietnamese Food Doesn’t Have to be Cheap

Although they may use the same ingredients or require the same amount of work and cooking techniques as other types of cuisines, there seems to be an accepted mindset across most Americans that there is a ceiling when it comes to paying for certain ethnic food. I do not know what the solution to tackling this perception about Vietnamese, Chinese, Mexican, and other ethnic foods in America may be because there are so many factors in play. However, I believe we can only progress the more we talk about this issue and challenge the narrative that certain ethnic cuisines must be inexpensive. In addition, the more immigrants and ethnic groups are willing to tackle this negative perception and charge higher prices for their foods (though, I understand not everyone will have the privilege to do so), the more it may be accepted as the norm 20 years from now.

We can do our part as consumers, too. Many of us are children of immigrants, so we know how much work goes into our food. We understand racial minorities in the U.S. get paid less despite doing equal work as their peers. We should be willing to support minority and immigrant-owned restaurants that are determined to charge higher prices for their food (if you have the means to do so, of course). My challenge for you all now is, the next time you walk into a Vietnamese-owned establishment that sells Vietnamese food and see premium prices, support it! Don’t accept the narrative that has been given to us that says Vietnamese food must come cheap. We should demand the same level of respect as other cuisines.

In his efforts to subvert this narrative, Eddie Huang proclaims, “I sell Taiwanese gua bao for a full f**king price in America.”

We should sell Vietnamese Phở for a full f**king price in America, too.

UNAVSA is launching a new mini series called: Food For Thought! Preparing and cooking food is a way to preserve tradition and culture. Many cultures, like the Vietnamese, showcase the diverse cuisine because food is a symbol of pride. This series takes a deep dive into not just food but the social connotations surrounding the topic.

This is the first essay in a three-part series. Part one interviews food caterers, and part three explores the tension between cultural appreciation and appropriation.