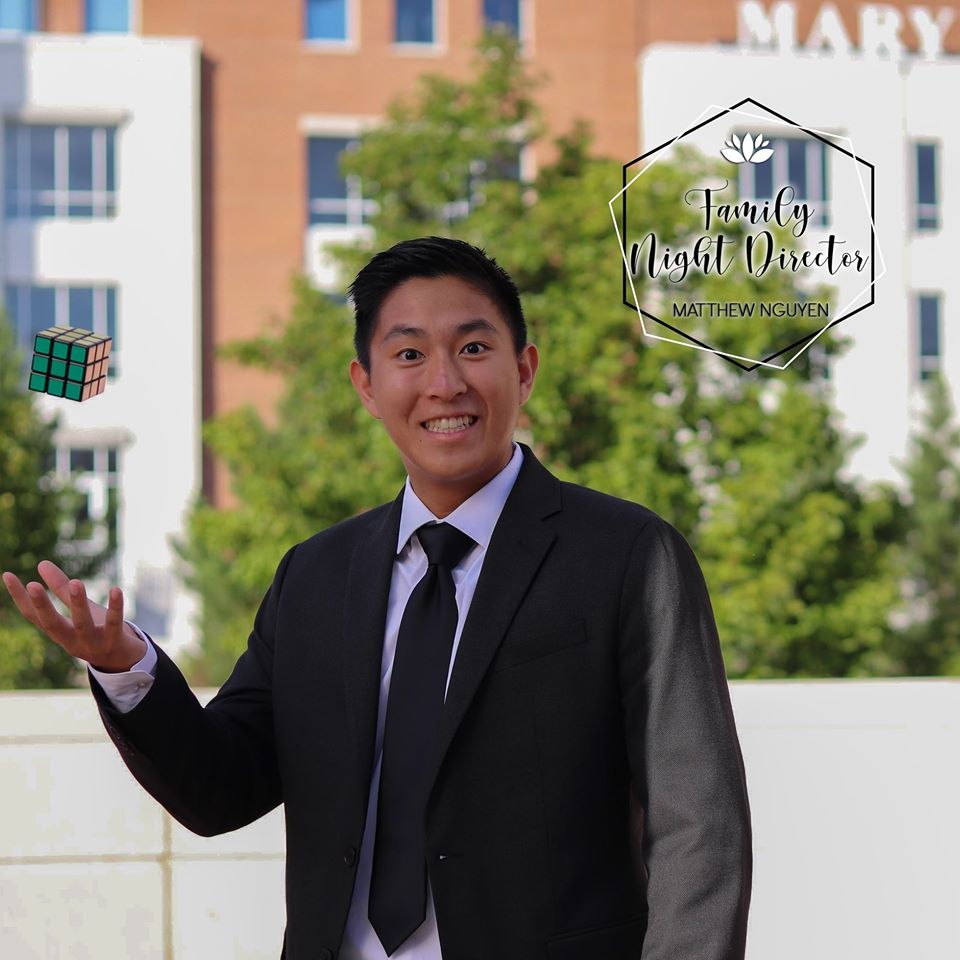 Matt is actually not a member of VSA at Virginia Tech. He attends the University of Maryland College Park and I am nominating him on behalf of MAUVSA. When you meet Matt, he is one of the goofiest, most heart-warming guys you will ever meet. He has this welcoming entertaining persona. We call him “Magic Matt” in MAUVSA because of this magic tricks he always pulls off at culture shows, parties, and any MAUVSA events like conferences, summits, and camps. He is also very out-spoken and is not afraid to tell the truth when it is the hardest. During UMD’s elections, Matt spoke up about a certain candidate when no one else would. Other people were thinking the same thing, but Matt had the confidence to speak up and be a voice for others. He has made UMD more active in MAUVSA than ever before. He even became a family leader at our annual conference and apparently his family was one of the top ranked and is super close even to this day (months later). Matt is extremely approachable and an amazing leader. He was UMD’s Family Night director (culture show, tet show, play) and was the lead the year before. He puts in basically every hour of his school day (that’s not to school) into VSA. I wouldn’t be surprised if he became their president one day or get even more involved higher up in MAUVSA. You really need to meet Matt to get the full gist of how amazing this guy really is.

Matt was the lead actor in his school’s Family Night (culture show/tet show/play) last year. He had the most lines and added his input in many of the show’s components.

He did not just focus on the acting, but helped out with the script, backstage, dancing, etc. This is what propelled him to become the Family Night director a year later. A lot of schools that visited thought UMD’s script the year before was only okay, but this year’s script blew everyone away. There were twists people were not expecting and the acting itself was much better. Matt coached and chose his actors, trusted his choreographers, set up the entire stage with backstage, and made sure productions was on point. Matt has recently been voted as the new External Vice President of his school’s VSA. He is the representative for his school with anything that concerns MAUVSA. He is the trusted middle man between region and school, as well as the voting body for his school when there are constitution changes, schools joining the region, etc. He represents UMD with poise and confidence. He is also probably one of the more outgoing representatives, which I appreciate as Internal Vice President, since he is under my care/group. With coronavirus affecting socializing, Matt makes the most of our group chats and video calls. Matt is super proactive and constantly posts on social media about MAUVSA news without me even asking. When he has questions on anything, he never hesitates to get clarification because he wants to do it right. Because of Matt, UMD has become even more active in the region and everyone knows who he is. His nickname throughout the ENTIRE region is, “Magic Matt.”

Matt has this leadership quality about him, where you can tell he doesn’t see himself “above anyone else.” He genuinely likes to put smiles on people’s faces. Matt is a performer above everything else. From being the lead actor to his magic shows, Matt loves to entertain. He has this wow factor about him that draws people close. He gains people’s attentions and keeps the attention with his aura. When Matt speaks, people stop and listen. UMD’s Family Night has over 400 attendees (and probably more because people sit on the floor since there are never enough seats). Matt was able to capture everyone’s attention and even did his best to cater to the Viet elder audience as well. Matt does not care about his reputation and is willing to speak up for people who are too afraid to do so. Like I said earlier, Matt spoke up about a certain candidate when no one else would. Matt started the domino effect when no one was willing to push first.