Night in Saigon 16: Dare to Speak

An original skit written by Teresa Tran, co-directed by Henry Bui and Teresa Tran, and starring Felecity Giang (Phuong), Kyle Ly (Alex), Sylvia Bui (Tiffany), Dong Yoo (Matthew), Grace Nguyen (Linh), Martha Sungkono (Hoa), and David Tran (Mayor), Dare to Speak is about aspiring artist Phuong who has dreamed of making art that leaves an impact on the world. But as the daughter of a Viet immigrant mom who owns a pho restaurant, she is stuck making uncreative and soulless marketing supplies to promote her mom’s business to compete against the enemy pho restaurant across the street. When the city’s mayor announces a plan to shut down and demolish all but one Viet restaurant in order to build an American strip mall in its place, both restaurants race to prove themselves, destroy each other and be the last Pho restaurant standing. But for Phuong, she sees this opportunity as her one chance to do some good with the talents that she’s got.

As Phuong becomes entangled in the competition, she quickly learns that the mayor secretly intends for the two restaurants to destroy each other in the process so no Viet establishment is left standing. In order to save her mom’s business and the Viet community at large, Phuong decides to rally up as many people (Matthew Thanh Dinh, Tiffany Truc Trinh, members of each Pho restaurant) as possible to protest and expose the mayor. However, Phuong will soon discover that not everyone (Alexander Tran) is as keen as her to get so involved in public affairs, make change and demand justice. Phuong will have to use her voice — and her art — to convince people to stand with her against the mayor, or she risks destroying her relationships with other people — and jeopardizing the survival of her entire Vietnamese community.

This skit aimed to promote voter engagement within our Vietnamese community, especially young college students, and to emphasize that we have the power to make a real difference in society, if only we dare. Through our 16th show, we aimed to encourage the multiple generations that make up our diverse Vietnamese community in America to rise up and dare to speak out. 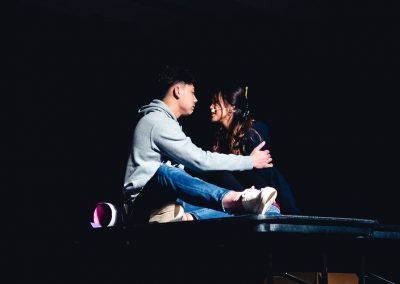 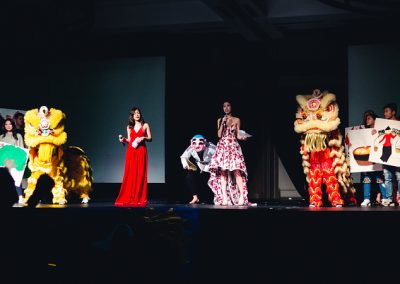