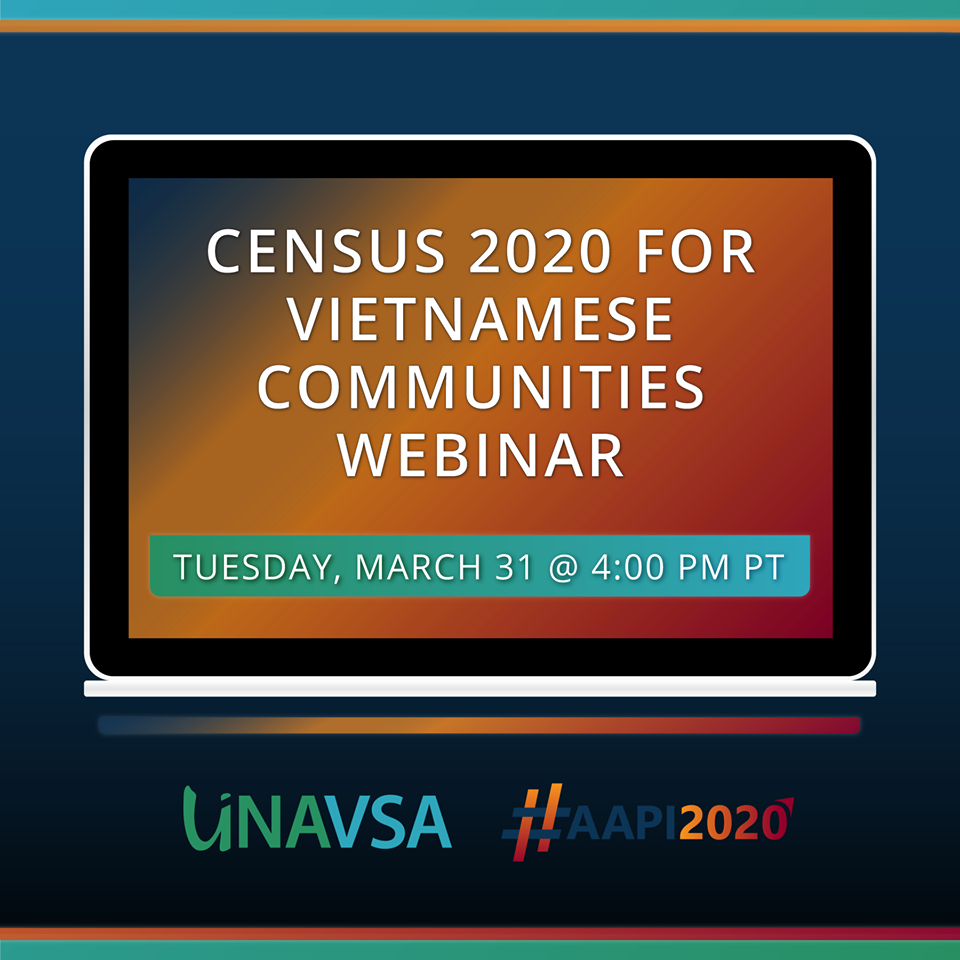 A recording of the webinar can be found here.

For the #AAPI2020 Census Week of Action, which ran from March 25th through April 1st, UNAVSA joined other major organizations to share information on how the Census affects Vietnamese communities and how Vietnamese American organizers can get involved in ensuring a complete count. We featured two panelists:

An Le is the 2020 Census Statewide Network Manager with the Voting Rights and Census program. As the daughter of refugees from Vietnam, An was shaped by the labor exploitation and class disparities she witnessed at a young age, prompting her to pursue a career committed to using comprehensive strategies to achieve justice and dignity for low-wage immigrant workers. Along those lines, she had the privilege to work as a legal organizer for the Koreatown Immigrant Workers Alliance, a research analyst for SEIU-United Service Workers West and United Healthcare Workers West, and a project director of community engagement at Asian Americans Advancing Justice-Los Angeles. She currently manages statewide outreach to Asian American and Native Hawaiian & Pacific Islander communities for the 2020 Census through Asian Americans Advancing Justice-Asian Law Caucus. She proudly serves on the Board of Directors for the Wage Justice Center and the Southeast Asian Community Alliance. An received her B.A. in Political Science from UCLA and her J.D. from Loyola Law School of Los Angeles. In her free time, she enjoys sewing, reading, and playing with her dogs, Estelle and Butler.

Vincent Tran is the Community Engagement Coordinator at VietRISE and currently serves as the field lead for VietRISE’s Census Campaign. He currently coordinates VietRISE’s community outreach and research efforts to develop a stronger relationship with and understanding of the Vietnamese community in Orange County. As the son of Vietnamese refugees, he actively strives to promote person-to-person dialogues to highlight the multiplicities of the Vietnamese community’s political, social, and historical identity. He strongly believes that diverse stories and perspectives are the impetus for change. Vincent holds a BA in Political Science from the University of California, Berkeley.

The event page can be found here.

The final recording of the webinar can be found here.

← Statement on Deportation of Hmong, Lao Immigrants COVID-19 and its Impacts on Vietnamese Communities →