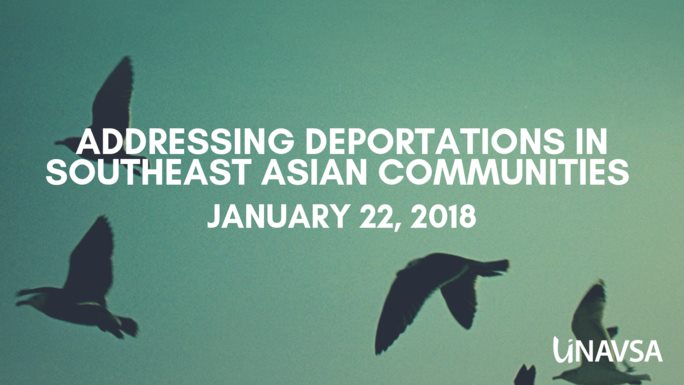 In response to the increasing rate of deportations of Southeast Asian refugees from the U.S., UNAVSA hosted a webinar featuring anti-deportation organizers, including Lan Nguyen from VietUnity, Cat Bao Le from SEAC Village, Nancy Dung Nguyen from VietLEAD, and Mimi Nguyen from VABANC.

In the follow up release, we shared more information about the current state of Southeast Asian deportations:

Incarceration and deportation has always been a reality in our community: since 1998, over 13,000 Cambodian, Laotian, and Vietnamese Americans have received final deportation orders, including many legal permanent residents. The Antiterrorism and Effective Death Penalty Act (AEDPA) & Illegal Immigration Reform and Immigrant Responsibility Act (IIRIRA), passed in 1996, increased deportation in immigrant communities and prevented immigration judges from considering cases and deportation orders individually. Such laws enforced the deportation of citizens who had committed “aggravated felony”—a broad definition that includes non-violent acts. According to the Southeast Asia Resource Action Center (SEARAC), 68% of legal permanent residents who are deported due to minor, non-violent crimes.

The original event is published here.

A recording of the webinar is available here.