Black History Month: Then, Now, & Us

Black History Month has been officially recognized in the U.S. since 1976 and in Canada since 2008 as a month to celebrate the role and contributions of the Black community in North American history, most notably during the events of the Civil Rights Movement demanding equal treatment. Oftentimes schools and other government institutions  concentrate on the progressive events and achievements, but never dive into the violent history and mistreatment of Black people. The omittance of this history in textbooks hides a dark reality, that issues pertaining to race relations still persist at a systemic level. There is a misconception that the battle for racial equality ended after the Civil Rights Movement and that it was never an issue in Canada. There has no doubt been great strides in the fight for human rights and equality, but without continuous awareness and knowledge, the marginalization of groups still remains a rampant state issue. Movements are not successful without allies and a concentration in particular is the relationship between Black Communities and Asian Communities.

Both the Asian and the Black communities have historically faced a common oppressor. Overcoming white subjugation and all issues pertaining to race relations has been an uphill battle, and when the need for solidarity has been most crucial, Black-Asian conflict has arisen. The animosity between the two marginalized communities is not simply individual prejudice; tension between the two communities is rooted in a deep history of systemic oppression. Both groups have been pitted against each other since the U.S. Reconstruction Era and the Canadian Immigration Act of 1910. The foundation is stained red and built on ethnic violence and colonialism. The destruction of cultures is rooted in the trading of African slaves and stealing of land from the Native Americans and Indigenous people in Canada. The pursuit of approval from the white majority, to simply survive, has resulted in the denial of diversity, culture, and individual identity. The lack of promised liberty and justice has led to a racial division that juxtaposes the causes of the two communities rather than unites them as allies.

The separation of the two communities is highlighted by events such as the LA Riots of 1992 and the Family Red Apple Boycott, causing cultural clashes among Korean and Black communities. One side of liberal Koreans sought to unite with other minorities to fight against racial oppression and scapegoating; while more conservative Koreans emphasized law, order, and political differences between minority groups. Another situation, the killing of Akai Gurley by New York police officer, Peter Liang, left Black Lives Matter supporters demanding and receiving justice. There were Asian Americans, however, who felt that Peter Liang was scapegoated when he was convicted while white police officers who have also killed unarmed young Black men have not received the same punishment. Elaine Kim, professor of Asian American Studies at the University of California, Berkeley, as a call to recognize the negative impacts of pitting Asians against Blacks, stated in an interview that “individual prejudices are symptoms of the larger structure.” It is important to recognize that animosity towards other minority groups can escalate to events such as the backlash around Gurley’s case, LA Riots, and the Red Apple Boycott if gone unchecked.

One must also look at the portrayal of Asians in society and how ideas like “The Model Minority” further contributes to anti-blackness. Historian Ellen D. Wu’s book, The Color of Success, breaks down how Asians were once seen as “The Yellow Peril”, a danger to the Western World during colonialism in the late 19th century and early 20th century; and argues that societal perception and treatment of Asians in North America has always been in flux and affected by changing policies and world events. For instance, the Chinese Exclusion Act barred entry into the U.S. in fear that jobs would be taken away. The Act was repealed in 1943 with the urge from President Roosevelt, because more allies were needed to win World War II. The Japanese had to continuously prove their allegiance withaccounts of combat during World War II even though civil liberties were taken away as Japanese U.S. citizens were put in internment camps. While less known, Asian immigrants in Canada also faced systemic racism and oppression. Anti-Chinese sentiments in Canada during the late 19th century Gold Rush mirrored that of the U.S. Japanese and South Asian immigrants in Canada also faced segregation and discrimination throughout the 20th century. These examples are not meant to compare which atrocities were worst, but a parallel that people of color are treated unfairly and Asians, under the “model minority” myth, are used as a wedge to further divide people of color. The Washington Post’s article, The Real Reasons The U.S. Became Less Racist Towards Asian Americans,  sheds light to the shift in the perception of Asians when “white politicians who saw it as a tool to win Allies in the Cold War”, and when “1960’s anxieties about the civil rights movement cause white Americans to further invest positive portrayals of Asian Americans.” The social health of an individual is interconnected with the social health of the collective and for this reason advocacy for other marginalized communities is crucial for the progression and health of society.

Despite the purposeful tension and division created to silence voices and break solidarity, the history of social movements is not without mutual support and collaboration. It ranges from key individuals during the Civil Rights Movement such as Grace Lee Boggs, Yuri Kochiyama, Richard Aoki, and Mike Tagawa; to community efforts between the Vietnamese and Black residents affected by Hurricane Katrina in 2005. Fast forward to present day to see more and more organizations that represent Asian Americans while advocating for all minority communities such as 18 Million Rising, theAsian American Legal Defense and Education Fund (AALDEF), and the Asian Americans Advancing Justice (AAJC).

UNAVSA acknowledges its crucial position in the fight for equality in order to progress the Vietnamese community in both the United States and Canada. As former President Barack Obama stated, “Change will not come if we wait for some other person or some other time. We are the ones we’ve been waiting for. We are the change that we seek.” By providing educational resources and promoting civic engagement, UNAVSA is extending its hand to our brother and sister minority communities. We know that the path towards social justice requires strengthening all marginalized communities for there is no simple solution to systemic oppression. We as individuals need to be more mindful that what affects one, affects all and thus lies Martin Luther King Jr.’s sentiment that “injustice anywhere is a threat to justice everywhere.”

How can you be involved?

REGISTER TO VOTE through the 2020 Project. What is the 2020 Project? YOMYOMF and UNAVSA are teaming up with the mission of registering 100,000 APIs by the 2020 Elections. Online voter registration is available 24/7 for most states. To make it even more interesting, we’re breaking it down to a friendly team competition. The team that garners the most votes? Well, let’s just say that your favorite Asian-American, Asian-Canadian, and Pacific Islander celebrities are watching and are signing up to become your Team Representatives to support y’all to vote, help elevate Asian representation, and battle it out to see which team can show up and get people to the polls!

Participating in voting at all levels of government (local & national) not only is a way to voice opinions on issues, but also shows Asians as active members that care about the state of the country. In return, policy makers and those in government leadership gear policy to those that show up and vote. Find out more information regarding online registration here. Don’t hesitate to contact us for additional support or voter registration help! 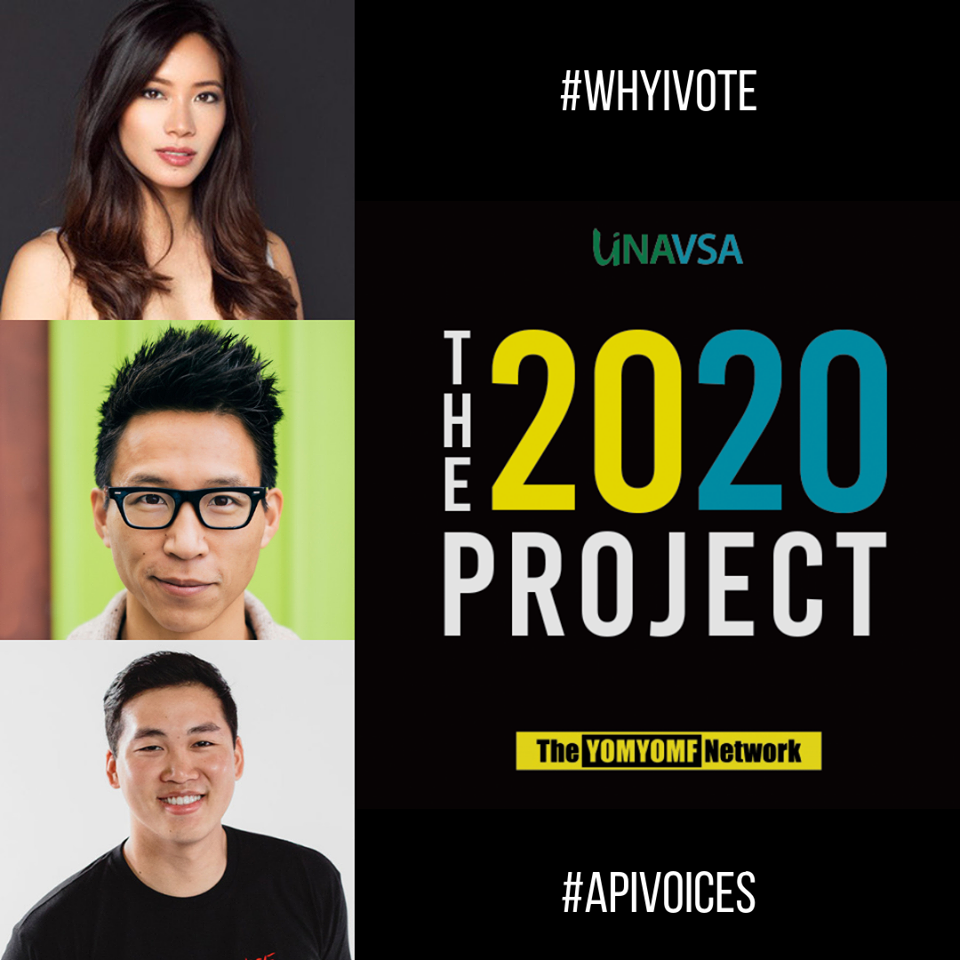 Any questions or comments can be directed to our Civic Engagement Director, Kevin Le, at kevin.le@unavsa.org, or our External Vice President, Katherine Phan, at katherine.phan@unavsa.org.